Opening glass roof at the Hotel Sir Nikolai in Hamburg

The Dutch hotel chain Sir Hotels had an eleven-storey office building at Katharinenstrasse 29 (Nikolaifleet) in Hamburg converted into a 5-star hotel. The name of the new luxury hotel is “Sir Nikolai”.

As a special highlight, the atrium was equipped with a Cabrio glass sliding roof that can be opened, in which the two middle parts can be driven in an extended rail system over the fixed separators. Thus the opening is larger than the fixed glazing.

3D sketch in the offer phase

Installation of the glass roof to be opened

The initial situation at the beginning of assembly

The panes, measuring 125 x 250 cm, were lifted by crane into the inner courtyard of the hotel and placed on the welded aluminium roof structure.

It is a mullion-transom construction with EcoSun equipment and highly heat-insulating triple glazing on a free-span saddle roof construction.

Integrated Sunshine-Cabrio sliding roof on stainless steel rails rolling above the fixed roof. Driven by two low-noise gearboxes – electric motor drives, on extended rail systems, outside the skylight. Embedding of the rails in aluminium guide profiles with additional drainage levels. Storage of the construction on concrete substructures constructed on site according to our specifications.

Dimensions of the Cabrio sliding roof 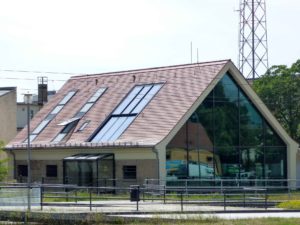 It is already a special relationship that prompted our client to have a modern, comfortable domicile newly built at this 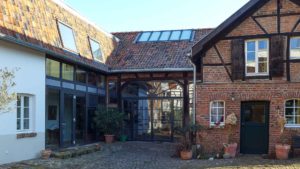 An old town farm is now the new home for a young family. On the threshing floor, where there used 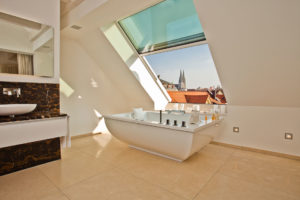 Penthouses always have a very special flair. Large roof windows flood the apartment with plenty of light and allow a